NAIJA NEWS - July 30 - Twitter has announced that the permanent closure of its New York City and San Francisco offices. The company decided in response to the latest Centers for Disease Control and Prevention (CDC) warnings about COVID-19.

TECH CRUNCH - July 29 - Twitter launch a pilot in the U.S. aimed at testing the potential for e-commerce on its platform. The company is introducing a new "Shop Module" that offers brands, businesses, and other retailers the ability to showcase their products to Twitter users directly on the business' profile.

CFO DIVE - July 27 - Twitter got its fastest quarterly revenue growth since 2014, CFO Ned Segal told. It generated $1.19B in revenue, a 74% YoY jump. The vast majority of Twitter's revenue stems from advertising; $1.05B came directly from ad sales, an 87% YoY jump. Total advertising engagement exceeded the high end of the company's guidance range by 10% or ~$110M. Segal said that Twitter envisions subscriptions being a "big part" of the company.

by Jane Thier
See full article at CFO Dive

ANI - July 19 - Twitter is rolling out captions for voice tweets. At the launch of voice tweets last year, the feature was criticized by many accessibility advocates for not having captions. The feature is presently available only on iOS. Twitter also offers captions in Twitter Spaces.

TECH CRUNCH - July 15 - Twitter has confirmed that Fleets - its own take on ephemeral Stories launched into general availability 9 months ago - is shutting down on Aug 3. The company said the reason for the move is a lack of activity.

CNET - July 8 - After being banned earlier in the year, former President Donald Trump said he's filed lawsuits accusing Google, Facebook, Twitter and their CEOs of First Amendment violations for alleged censorship. Lawsuits that allege censorship and that argue social media companies violate the First Amendment when they remove posts or ban users have repeatedly been rejected by courts across the country.

TECH CRUNCH - July 7 - In a court filing, New Delhi said Twitter had lost its immunity in India after the American social network failed to comply with the new local IT rules, unveiled in February and went into effect in late May. With the liability protection stripped off, Twitter executives in India could face several criminal charges over content deemed objectionable on the platform.

FORBES - June 14 - The bitcoin community cheered Tesla billionaire Elon Musk's headfirst dive into crypto this year. Musk sent the bitcoin price sharply higher when Tesla's surprise bet on bitcoin was announced in February. Still, his outlandish Twitter persona and growing support for ethereum and the meme-based dogecoin has since antagonized bitcoiners. Now, Twitter CEO Jack Dorsey, a long-time bitcoin-backer, has revealed it's "only a matter of time" before either Twitter or its fledgling decentralized social network project Bluesky integrates bitcoin payments has replaced Elon Musk as bitcoin's new billionaire champion.

SLASH GEAR - Jun 8 - Super Follows has been described as Patreon, where fans can pay a monthly fee of ~$4.99 for exclusive perks. Those who want to have Super Followers will need to have at least 10K followers and have posted at least 25 tweets in the past 30 days. Super Follows might be launching sooner than expected, and it's just one of the latest monetization options Twitter is offering users.

by Ewdison Then
See full article at Slash Gear 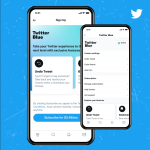 TECH CRUNCH - June 4 - Twitter launches its first-ever subscription service, Twitter Blue, initially in Australia and Canada. The subscription will allow Twitter users to access premium features, including Bookmark Folders, read threads in a clutter-free format and take advantage of an "Undo Tweet" feature - which is the closest thing Twitter will have to the "Edit" button. In Canada and Australia, the subscription will cost $3.49 CAD or $4.49 AUD, respectively. Twitter Blue will initially be available in its supported markets on iOS only.

TECH CRUNCH - June 2 - Ads are coming to Twitter's version of Stories, known as Fleets. The company announced today that it would begin pilot testing Fleet ads in the U.S., bringing full-screen, vertical format ads to Twitter for the first time, allowing it to better compete with the vertical ads offered across social media platforms. Fleet ads will appear between Fleets from people followed and will support both images and video in 9:16 format. The video ads support up to 30-seconds of content, and brands can also include a "swipe up" call-to-action within their ads.

Twitter Has Paused Accepting Verification Requests in a Week After Relaunch

GADGETS 360 - June 1 - Twitter has stopped taking new verification requests just over a week after relaunching the program on May 20. The company said it received many applications. The company was "rolling in" the verification requests received so far and will reopen requests soon. Twitter is also working to introduce Twitter Blue, a paid subscription to the microblogging site with some exclusive features.

CNET - May 17 - A forthcoming subscription service from Twitter will be called Twitter Blue and cost $3 a month, tipster Jane Manchun Wong tweeted. Wong also said the service could have a tiered pricing model, with users who pay more getting more features.

WALL STREET JOURNAL - May 11 - Lara Mendonça, the woman who led the design of Bumble's dating app in the run-up to the company's February IPO, is joining Twitter, bringing a philosophy of designing for inclusion and safety to a platform that is taking steps to curb abuse and harassment. Lara Mendonça is set to join Twitter on June 14 as a senior manager of product design in the company's "creation and conversations" team. Bumble declined to comment on Ms. Mendonça's departure and on her successor.