IG - Sep 29 - A US-based IPO could be on the cards for TikTok. It doesn't currently have a set date, and the technicalities of the listing are being worked out. What we do know, is that the company will likely be listed in the US under the new name TikTok Global. This company will be majority owned by ByteDance (80%), and minority owned by both Oracle and Walmart (20%). But, this ownership stake has not yet been confirmed as the US firms are reportedly requesting a larger share of the company. The most recent valuation for TikTok was ~$50B back in July 2020.

ECNS - Sep 29 - The preliminary injunction was issued by a federal judge on Sunday night against a U.S. administration's order to ban TikTok from American online app stores. However, Sunday's ruling could be challenged by the government. The Justice Department is likely to appeal. Trump and some U.S. politicians have repeatedly speculated that TikTok poses a national security threat to the country, though providing no evidence to support the allegations.

TECH CRUNCH - Sep 24 - The September 20 deadline for a TikTok sale has already passed, but the parties involved have yet to settle terms on the deal. Oracle and Walmart presented conflicting messages on the future ownership of the app, confusing investors and users. Meanwhile, Beijing's discontent with the TikTok sale is increasingly obvious. China has no reason to approve the "dirty" and "unfair" deal that allows Oracle and Walmart to effectively take over TikTok based on "bullying and extortion," slammed an editorial published in China Daily. The editorial argued that TikTok's success has apparently made Washington feel uneasy and prompted the U.S. to use national security as the pretext to ban the app. Beijing has already modified a set of export rules to complicate the potential TikTok deal, restricting the sale of certain AI-technologies to foreign companies.

Trump Agrees to TikTok Deal With Oracle and Walmart

CNBC - Sep 21 - Trump has given his blessing to a deal in which Oracle and Walmart would partner with TikTok in the U.S. Oracle will become TikTok's cloud provider and a minority investor with a 12.5% stake. Walmart has agreed to a purchase 7.5% stake, and CEO Doug McMillon would serve as one of the five board members of the newly created company. TikTok's Chinese parent company ByteDance will own the remaining 80% of TikTok.

TikTok Will Be Sold to Oracle Without Its Algorithm

GRIT DAILY - Sep 17 - Oracle will be purchasing TikTok after ByteDance rejected Microsoft's previous bid. The company, however, will not be selling its popular algorithm to Oracle as part of the reported deal. No details about the sale price have been revealed thus far, and the Associated Press even revealed that Oracle is not calling the acquisition a sale, signaling that it could mean that the company will instead operate as a U.S. partner with ByteDance. The entire acquisition depends on approval from Trump.

TikTok Will Reportedly "Sell" to Oracle After Microsoft Bid Rejected

MASHABLE - Sep 15 - Oracle has beat out Microsoft to win the bid for TikTok's U.S. operations. The deal probably won't be a straight up sale. Rather, Oracle will be TikTok's "trusted tech partner" in the U.S.

TECH CRUNCH - Sep 15 - YouTube Shorts will allow users, initially in India, to upload 15-second or less short-form videos using a new set of creator tools, including a multi-segment camera, similar to TikTok, speed controls, and a timer and a countdown feature. The videos can also be set to music, thanks to YouTube's access to a large library of songs that it says will continue to grow over time. These are tools common to TikTok and are the same features that Instagram recently cloned for its own TikTok rival, known as Reels.

NY DAILY NEWS - Sep 11 - TikTok admits to restricting some LGBTQ and political hashtags from users in countries including Russia, Jordan and Bosnia. Words such as "gay," "lesbian," and "transgender" were shadow-banned. "Shadow banning" refers to a type of censorship in which social media networks hide certain terms from searches without letting users know that the term is being banned - as opposed to completely removing a word or expression from the platform.

Why Consumers Use TikTok

DIGITAL INFORMATION WORLD - Sep 10 - According to Globalwebindex's US and UK survey, 60% of respondents said that they use TikTok to find entertaining content, while 45% said that they use the platform to fill up their spare time. On the other hand, 28% of TikTok users use it for new ideas, and 24% visit the platform to learn how to do new things. 28% use the app to express themselves and 11% to get famous. The report also explains why brands use TikTok. 34% of professionals use the platform to directly communicate with consumers, while 33% use TikTok to share general updates, and 26% use TikTok for selling purposes. 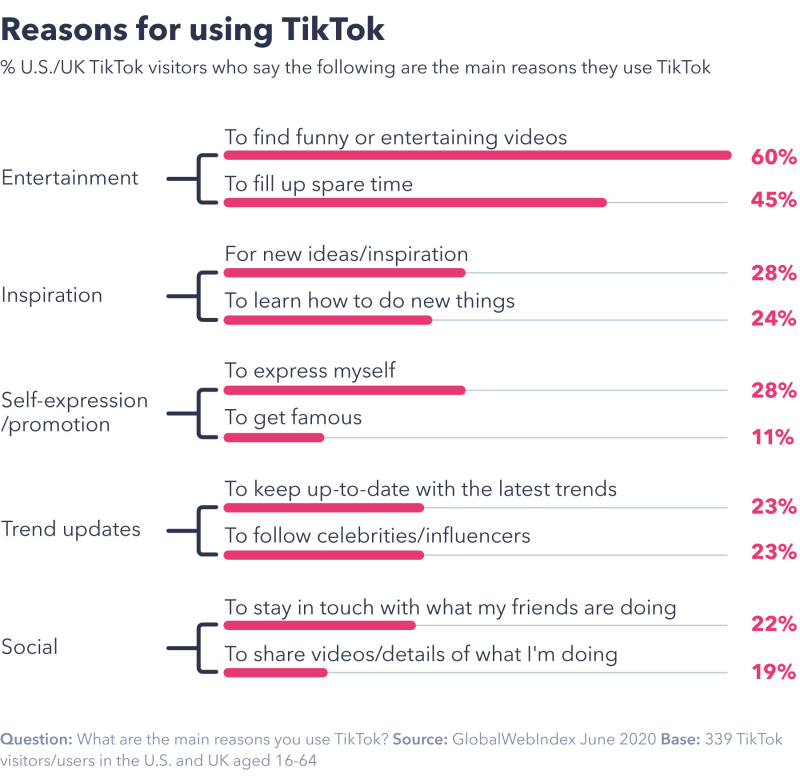 ADVANCED TELEVISION - Sep 10 - According to eMarketer, TikTok will grow its UK user base by 75.2% this year, reaching 8.5M users, after triple-digit growth last year. Both 2020 and 2021 will be years of notable firsts: Usage will exceed 10% (12.7%) of the UK population this year, and total users will surpass 10M next year.

EUOBSERVER - Sep 8 - TikTok has joined the EU code of conduct on countering illegal hate speech online. Facebook, Microsoft, Twitter, YouTube, Instagram, Snapchat, Dailymotion and Jeuxvideo.com are also part of the code of conduct, which was launched in 2016.

IOL.CO.ZA - Sep 8 - TikTok closest rival Triller has filed a patent infringement lawsuit in the USA for a video-related patent. The patent in question is US Patent No. 9,691,429. This patent is for a method of combining multiple videos synchronised to a single audio track which forms a big part of TikTok's offering. Last year, TikTok introduced a "green screen video" feature, which enables users to capture multiple short videos and then synchronise or stitch them together to one song or audio track.

TikTok Doubles Down on Its Revenue Funnel With Marketing Partners

TECH CRUNCH - Sep 4 - Today, TikTok - which has 100M users in the US - announced a slate of marketing partners to help brands create and measure the impact of campaigns on the app. The company is kicking off the program with 20 partners. This is the latest expansion of TikTok for Business, the company's advertising platform, which launched officially in June to bundle together TikTok's existing marketing products alongside a new AR product it launched to rival Snapchat's.

TikTok Creators to Sell Merch Within the App

TECH CRUNCH - Sep 1 - China's Ministry of Commerce has updated its export control categories to cover AI technologies. AI is the anchor of ByteDance products including TikTok. TikTok's Chinese parent ByteDance issued a statement saying it will "strictly follow" the new technology export rules and handle its "related export businesses." Though the new rule is not explicitly targeted at the TikTok deal, its timing is curious.