Instagram Chief Explains How the Service Decides What Users See

THE VERGE - June 9 - Instagram chief Adam Mosseri shed some light on how the social network decides what you see in a new blog post published. Mosseri explained that Instagram uses "a variety of algorithms, classifiers, and processes, each with its own purpose" to determine what to show users. He then broke down the "signals" Instagram uses to surface something in their feed, stories, Explore tab, and Reels.

by Jay Peters
See full article at The Verge

IMORE - May 25 - Instagram now shows influencers and businesses more information about their Reels and live videos, giving them the tools needed to see what works and what doesn't. The new 'insights' give people the chance to see how many likes, comments, and saves Reels have to their name, plus additional information for live videos. Instagram has also updated its Accounts Insights page, says Engadget.

IANS - Apr 26 - Instagram Reels is bringing ads to Reels in few countries, including India. The full-screen ads will be arriving first in India, Germany, Brazil, and Australia before landing in more countries in the coming months. The spots are similar to Instagram's ads for Stories. Ads can run up to 30 seconds, and users can interact with them the way they would with organic posts (including skipping them altogether). Ads can also include "shop now" buttons.

TECH CRUNCH - Apr 1 - Instagram launches a new feature called Remix, which offers a way to record your Reels video alongside a video from another user. The option is similar to TikTok's existing Duets feature. Instagram's new feature has been in public testing before today, so some Instagram users may have already gained access. The feature will only be available on newly uploaded Reels.

FINANCIAL EXPRESS - Mar 10 - Instagram is set to give some creators in India an option to share their short video clips- Reels on Facebook's main page. The company will now be sharing the Instagram Reels with augmented-reality effects in the news feed of Facebook. The company is also calling this feature separately "Reels on Facebook." The company is also looking forward to introducing Clubhouse-rival on its platform. The new feature is expected to be called Audio Rooms and can be a Clubhouse-like experience for users, especially Android users who do not have access to Clubhouse currently. The development was spotted by a popular reverse engineer, Alessandro Paluzzi.

Instagram Wants to Keep TikTok Videos out of Reels

INQUIRER.NET - Feb 12 - Instagram no longer wants to see videos featuring the watermark of TikTok in its Reels format. In fact, the Instagram algorithm will no longer promote videos originating from other applications in its user newsfeeds. The reason for that is that internet users react less favorably to recycled content. The decision may seem quite radical to users, but Instagram argues that recycling content makes for a "less satisfying" user experience due to the poor image quality.

SOUTH CHINA MORNING POST - Oct 7 - Instagram is bringing shopping to its stand-alone longform video app IGTV and short video feature Reels. Shopping on IGTV is rolling out globally and Instagram said it will test shopping on Reels later this year. On IGTV, users can now watch and buy an item with a few taps right from the video, completing the purchase on the seller's website. 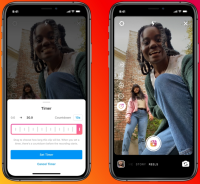 TECH CRUNCH - Sep 24 - Instagram is today rolling out a few changes to Reels, after early reviews criticized its design and reports indicated it was failing to gain traction. The company says it's responding to user feedback on a few fronts, by giving Reels users the ability to create longer videos, extend the timer, and by adding tools to trim and delete clips for easier editing. TikTok's default is 15-second video but it allows videos up to a minute in length, which is a popular option. Reels will allow videos up to 30 seconds long. This could force users to create original content for Reels, instead of repurposing their longer TikTok videos on Instagram.

Can Influencers Get People to Switch From TikTok?

USA TODAY - Aug 10 - Some of TikTok's most popular creators have already jumped ship. Some are encouraging their followers to shift to Triller. Meanwhile, other TikTok influencers were reportedly being financially wooed by Facebook to join Reels, which is embedded in Instagram. But will followers actually budge? Probably – but only so many, experts say. A glitzy new app isn't reason enough to tell followers to try something new. "If TikTok does get banned, we will probably take their place," said Mike Lu, CEO of Triller. "This weekend, we saw our servers literally blow up" as people flocked to the platform. Triller's sudden growth was "organic," Lu said, while Instagram is said to be paying influencers hundreds of thousands of dollars to use its Reels feature.