TikTok Is Still The World's Most Downloaded App

INQUIRER - May 11 - TikTok is still the most downloaded non-gaming app worldwide in Apr 2021, with ~59M new downloads recorded in the space of a month. The social network outstrips Facebook and Instagram and saw its largest installs in Brazil with 13% growth. 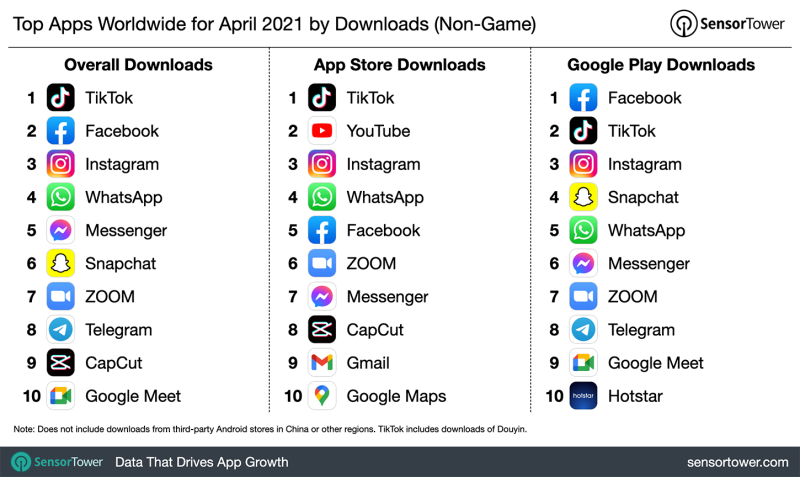 USA TODAY - May 11 - Pew Research Center study in Jan said ~80% of social media companies are doing an only fair or poor job at addressing online harassment or bullying on their platforms. The Pew Center study also said ~ 68% of lesbian, gay or bisexual adults who say they have been harassed online think it occurred because of their sexual orientation. Facebook, YouTube, and Twitter each said in separate statements that they want to make their platforms safer for all, including the LGBTQ+ community.

BILLBOARD - May 11 - Long-time media executive Marc DiLorenzo launched an interactive video streaming platform created specifically for guitar-based music named 2GTHR.co. For subscriptions ranging from $9.99 to $11.99, fans get access to live and archived performances with high-def video and audio by guitarists. 2GTHR.co also allows fans to have one-on-one relationships with artists and the ability to join performers "on stage" as they live stream from their homes, studios, or elsewhere for face-to-face live Q&As and chats.

DIGITAL INFORMATION WORLD - May 10 - There are ~430M MAU on Reddit, and the platform is expected to grow even further up to double its current size. The firm is growing worldwide as the firm is testing new features like videos, audio, and digital economy. Reddit is also recruiting many people, and it is expecting to become double its size at the end of this year, ~1.4K people.

Clubhouse Launches on Android in The U.S.

MASHABLE - May 10 - Clubhouse is rolling out on Android starting Sunday in a beta state. It'll just be available in the United States at first, with other English-speaking places (and eventually the rest of the world) getting access in the coming weeks. The U.S.-only period won't include some features (such as payments) right away, as the company collects user feedback before the wider rollout.

See the top news on Clubhouse

BLOOMBERG - May 10 - Zhang Yiming built ByteDance Ltd. into the world's most valuable private company via a string of blockbuster apps like TikTok that challenged Facebook and other incumbents on their own turf. His latest target: Alibaba. The co-founder has hired thousands of staff and roped in big-name sponsors like Xiaomi Corp. impresario Lei Jun to drive what he calls his next "major breakthrough" into a global business -- selling stuff to consumers via its addictive short videos and live streams.

PYMNTS - May 10 - Snowball Finance Beijing Internet Information Technology Co., an online financial information and social network portal backed by Ant Group, is looking into a $300M American IPO. Founded in 2010, Snowball - or "xuequi," in Chinese - says its goal is to help users build their wealth "like a snowball." Last year, the company raised $120M in a Series E funding round led by Orchid Asia Group.

YAHOO SPORTS - May 10 - Marie-Anne E. Prah and Onanma Okeke are the co-founders of TENT, a private social network to help young, professional women of color navigate their careers. TENT was launched in Nov 2020. With ~1.5K members, the network currently has a waitlist to join and an app in development. The app will host a job board, community feed, and networking event opportunities.

YAHOO FINANCE - May 7 - Venture capital is flowing into non-fungible token (NFT) platforms at an unprecedented rate. The latest to secure a big chunk of funding is Showtime with $7.8M. Showtime aims to give content creators a better way of distributing and monetizing their work.

CRYPTO ECONOMY - May 7 - Ethereum-based social network Livetree (founded in 2015) has completed its initial integration with Moonbeam, an Ethereum-compatible smart contract platform on Polkadot, to start its migration from Ethereum-based contracts to Moonbeam. Livetree has completed the first phase of integration on Moonbase Alpha Testnet with a successful deployment of Livetree's existing Ethereum based contracts to Moonbeam.

by Atiq Ur Rehman
See full article at Crypto Economy

SOCIAL MEDIA TODAY - May 7 - Clubhouse has announced the first round of projects selected as finalists for its Creator First accelerator program, which will provide the winning proposals with support and funding to help them develop their Clubs and rooms in the app. This first announcement includes a range of projects that will move onto the next phase of selection. The 50+ shortlisted projects include a broad diversity of topics and ideas.

See the top news on Clubhouse

TECH CRUNCH - May 8 - TikTok is expanding its integrations with third-party apps. The company introduced TikTok Login Kit and Sound Kit, that will allow apps on mobile, web and consoles to authenticate users via their TikTok credentials, build experiences that leverage users' TikTok videos and share music and sounds back to TikTok from their own apps. Once signed in, users can access their TikTok videos in the third-party app, potentially fueling entire new app ecosystems with TikTok content. Early adopters of the Login Kit include gaming clips app Allstar, anti-anxiety app Breathwrk, social app IRL, as well as dating and friend-making apps Snack, Lolly, MeetMe, Monet, Swipehouse and EME Hive.

The Inside Story Of TikTok's Tumultuous Rise, And How It Defeated Trump

FORBES - May 6 - TikTok has faced plenty of corporate drama both inside and outside the company, according to interviews with current or former employees. At the end of 2019, TikTok was trying to avoid having any political content. "They were trying to be a place for fun, an app for singing and dancing," says a person familiar with the internal discussions. Around this time, TikTok began working to add a Content Advisory Council, a group of outside experts meant to advise the company on issues including political content. By mid-2020, political conversation on TikTok was flourishing, and videos tagged with #election2020 and #2020election would accumulate 3.4B views. And then came the fateful moment in June when hundreds of teens and K-pop fans launched a campaign on TikTok to disrupt a Trump rally in Tulsa, Oklahoma, by registering for free tickets with no plans to attend the event. In August 2020, Trump ordered a fast-paced sale of the business, saying he'd ban TikTok if that didn't happen. Could the Tulsa rally really have been the igniting event? Morale within TikTok suffered as Trump launched his attacks. Internal practices and procedures that some describe as toxic stand in sharp contrast to the company's public perception as a forum for light-hearted entertainment for young people. By Election Day, the date TikTok had so fretted about, things were looking up even more. Trump was out, Democrat Joe Biden was in. Biden has made his priorities clear: vaccines and the economy. The Oracle-Walmart deal remains in limbo. It's unclear whether it will ever be finished.

BUSINESSWIRE - May 6 - ParshipMeet Group, a leading provider of interactive dating solutions, has partnered with TikTok. Using TikTok's new Login Kit, members of ParshipMeet Group's MeetMe app will be able to add their most recent TikTok videos to their profiles in a new TikTok Carousel, showcasing their personalities in a richer way than a profile picture. ParshipMeet Group expects to add additional integrations with TikTok in the future.