ADWEEK - May 14 - Nextdoor teamed up with GlobalWebIndex to study how the pandemic affected people's finance and spending habits. It was found that people bought more electronics, furniture, and healthcare items in 2020. One-fifth of respondents said they rely more on local businesses now than they did pre-Covid. Major purchases planned for this year include electronics, home improvement items, and travel.

Nextdoor App Reaching out to Potential Users by Mail

CTV NEWS - Apr 30 - Nextdoor is a hyper-local private social media that features different sub-regions within cities across the world as a way to share information and stay up to date with what's happening on their block. Based in the U.S., the company is now using mail-outs in a standard form from existing local users to get people to join the community. "If you get a letter in the mail, don't be scared, it's just me," says Nancy Lefebvre, a member of the East-Windsor group who joined the app last year.

Nextdoor to Serve up Anti-Racism Notification, Become Gatekeeper of Language

MEDIAPOST - Apr 20 - Nextdoor is launching an anti-racism notification to prevent discriminatory language on the platform. The notification detects potentially racist content and prompts neighbors to reconsider and edit before posting. In particular, it detects language that can be discriminatory to people of color.

MARIE CLAIRE - Mar 17 - Nextdoor is trying to protect users' mental health due to loneliness, and its growing popularity is a testament its urgent relevance. The hyper-local social networking app connects people in the same community and saw massive growth as everyone sequestered in their homes and maybe for the first time realized that they have neighbors. The platform, founded in 2010 and valued at a cool $2.1B, became a hub for community news and local entertainment during the pandemic, a virtual way to feel an intimate connection with those down the block. Sarah Friar, the company's CEO since 2018, navigated both her team through this growth and the league of users from 223k neighborhoods who flocked to the app in search of human connection. 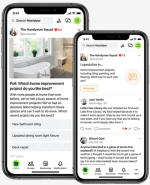 SMALL BUSINESS TRENDS - Nov 17 - Nextdoor, the hyperlocal social networking service for neighborhoods has launched a Neighborhood Sponsorships feature. The service offers businesses a new marketing tool to promote their business and engage with the local community on a zip code level. This feature enables sponsors to receive two Business Posts per month and enable businesses to respond to private message and comments on their posts to maximize engagement with potential customers.

The Messy Politics of Nextdoor

VOX RECODE - Oct 27 - Though it's best known for wanting to help neighbors locate missing dogs, connect with babysitters, and find fellow hobbyists, that's not what some Nextdoor feeds look like in the days ahead of the 2020 election. Despite the company's efforts to keep things civil, some conversations on Nextdoor are becoming riddled with conspiracy theories and tense fights over local politics as well as the presidential race. Nextdoor, which has reportedly signed up ~10M users and ~220K neighborhoods in the US, is mulling an IPO and has long tried to set itself apart as a safe space for local discourse. For instance, a feature called a "Kindness Reminder" encourages people to be nice in their comments on the platform. Nextdoor prohibits false information that could interfere with voting and calls to incite violence. The company also doesn't allow political ads.

TECH CRUNCH - Oct 21 - Facebook has started to test a Nextdoor clone, called Neighborhoods. Neighborhoods is currently live only in Calgary, Canada, where it is being tested before getting rolled out more broadly. Earlier this month during Facebook's Communities Summit, CEO Mark Zuckerberg said that there were ~1.8B people engaging with Groups at least once a month on Facebook, with ~70M group admins and moderators. "We're going to make communities as central to the FB experience as friends and family," Zuckerberg said back in 2019 and repeated again this month.

BLOOMBERG - Oct 19 - Nextdoor, a social network for neighbors sharing information or trading goods and services, is considering options to go public. The company is targeting a valuation in the range of $4B - $5B. Nextdoor has raised ~$470M, and was last valued at $2.2B after a funding round in Sep 2019.

FAST COMPANY - Oct 15 - Nextdoor was founded in 2010 by 7 friends, most who'd worked at Shopping.com. Before the pandemic, Nextdoor was known for its role in racial profiling and over-policing. Soon after the company announced a funding round in 2015 that valued it at ~$1B, an article reported that black residents walking in neighborhoods were often photographed and posted on the site as suspicious. Sarah Friar, Nextdoor's CEO from 12/18, tried to outrun Nextdoor's reputation and transform the company into a mktg channel for local businesses. Nextdoor released a Help Map for neighbors to post lists of what they needed (during covid) so others could fulfill them. They saw an 80% monthly surge in DAU. In 9/19, Nextdoor introduced Kindness Reminder, which checks to see if a user's post has words in it that in the past tended to be flagged as abusive, and then asks them to rephrase before it's uploaded and got a 30% reduction in reported content. The company is not yet profitable.

MOBILE MARKETER - Oct 8 - Location marketing company Uberall partnered with neighborhood social network Nextdoor to boost the visibility of local businesses among nearby consumers. Businesses with a profile page in Nextdoor will be visible when consumers search for products and services "near me". Nextdoor aims to build consumer confidence, with 70% of its members saying they trust word-of-mouth recommendations from neighbors more than anything else.

NEXTDOOR - July 24 - Heidi is joining Nextdoor from LinkedIn where she was VP of Global Sales. Nextdoor is a social network for neighborhoods. The company was founded in 2008 and is based in San Francisco.

TECH CRUNCH - July 15 - Nextdoor is launching a new feature called Sell for Good, allowing uses to sell items on the neighborhood-focused social network and donate the proceeds to local nonprofits. CEO Sarah Friar said that since the pandemic started, conversations about donations have increased 7x on Nextdoor.

TECH CRUNCH - Dec 20 - Nextdoor, a Facebook for neighborhoods, has just launched its 25Kth neighborhood. The network is now being used in 1-in-6 USA neighborhoods.

TECH CRUNCH - Dec 13 - Nextdoor lets people create private social networks with others who live in their local neighborhoods. The startup has raised $100M. Others want in on this space. Tel-Aviv-based Meetey wants to do something similar to Nextdoor and today it’s expanding to ~90 countries and says it has hit 200K users.

STAR TELEGRAM - Dec 3 - San Francisco-based Nextdoor, launched in October 2011, has grown to 24K neighborhood websites. Information about crime is ~20% of each website’s content. Participants also use it to share information about events such as block parties or to suggest local businesses. Nextdoor plans to sell advertising to local businesses, but it’s currently backed financially by investors including Benchmark and Greylock Partners.