Bebo Lets People Reserve Usernames as It Gets Closer to Relaunching

THE INDEPENDENT - Mar 12 - Bebo appears to be getting closer to launching its comeback. The site is an entirely new project and that - beyond the name and web address - the old information has been lost. The site is intended to recreate some of the design of the original Bebo, and the profile-focused design that was present not just in the first version of the site but in others like Bebo. It aims to join that with the newer design of feeds that is present in everything from Instagram to Twitter, it notes. It is currently in a closed beta, and people can only actually see the site if they are invited by somebody who is already using it. But before it goes properly live, Bebo is giving people the option to reserve their username to make sure it is claimed when they get there.

by Andrew Griffin
See full article at The Independent

Bebo Nostalgia Will Not Be Enough for Relaunch Success 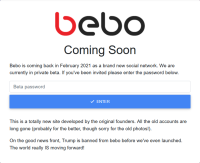 VERDICT - Feb 15 - Bebo co-founders Michael and Xochi Birch have announced a relaunch of Bebo in Feb 2021, 16 yrs on from the social media platform's creation. The Bebo relaunch may resonate with generation X and millennials who used the platform in the late 2000s, but Bebo nostalgia and will not be enough for success. In a fast-paced industry, the Bebo relaunch will need innovative features to appeal to a wider user base and avoid failure. While the exact design and features of the 'new' Bebo are not known, the platform will avoid newsfeeds pushing misinformation. For that reason, the relaunched version of Bebo will not include a newsfeed, focusing on profiles and interactions between friends in real-time.

BBC - Feb 4 - Bebo's co-founder plans to relaunch the social network with a focus on profiles and "real-time" interactions between friends rather than the news feed at the core of Twitter and Facebook. Michael Birch says his aim is to provide a "refreshing break" from the misinformation spread elsewhere. Bebo - an acronym for "blog early, blog often" - was once the most popular network in the UK, as well as being big in Ireland, Australia and New Zealand. At its peak, it had ~40M members. Bebo has been sold for $850M. But Mark Zuckerberg had proposed to sell it to Facebook for stock options.

Bebo Is Making a Comeback as a 'Brand New Social Network'

BUSINESS INSIDER - Feb 1 - Bebo will return in Feb 2021. The new site is currently in private beta, and only people who have been provided with the password can access it. Bebo was founded by husband-and-wife team Michael and Xochi Birch in 2005 and had a tumultuous rise and fall. Bebo gained mass popularity in Ireland and the UK, where it was the most visited social network in 2007 with 80M users. The founders sold Bebo to AOL for $850M but this was just as Facebook was taking off. AOL sold off Bebo to investment firm Criterion Capital Partners for $10M, and Bebo filed for Chapter 11 bankruptcy in 2013. Bebo's founders decided to buy it back for $1M, with a pledge to "reinvent" it. The Bebo site turned to streaming software and then to esports tournaments. In 2019, it was acquired by Amazon subsidiary Twitch for $25M. The Bebo site itself was then taken offline. Sixteen years after it first launched, Bebo is now making a come-back.

TECH CRUNCH - June 17 - The rumors are true: hedge fund Criterion Capital Partners is indeed the buyer of Bebo. AOL is offloading Bebo for less than $10M (other media are reporting a purchase price of around $2.5 million). Criterion Capital Partners will take over Bebo’s global operations immediately and retain its San Francisco-based headquarters. Exact terms of the deal are not being disclosed by either party, but AOL CEO Tim Armstrong sent a note to all employees this morning that suggests our earlier reports that the ability to offset almost the whole sum it paid for Bebo as a tax loss played a big role are correct. FULL ARTICLE @ TECH CRUNCH

MASHABLE - Dec 14 - As the Wall Street Journal reports, AOL is in talks to sell ICQ, the once prominent — but now archaic — instant messaging service. The Wall Street Journal also says that Bebo, the social network AOL acquired in 2008 for $850M, may be on the block. In the ensuing 20 months, Bebo hasn’t quite turned out to be the profit-center AOL hoped it would be. Although traffic was up after a redesign in February, Bebo has continued to languish as European users migrate to Facebook, like the rest of the world. FULL ARTICLE @ MASHABLE

THE FINANCIAL -- Mar 19 --  AOL People Networks has announced the launch of Bebo in India, and marked its entry into the Indian market with Hindi entertainment TV channel, REAL. The launch in India follows launches in France, Germany, Italy, Spain, the Netherlands and US Latino.  FULL ARTICLE @ FINANCIALCHANNEL.COM

THE NEW ZEALAND HERALD -- Aug 21 -- Bebo’s 36 million members soon will be able to use Microsoft’s Windows Live instant messaging service on the site. Bebo users – 90% of whom already use such services – will be able to export and import contact lists and instant message one another with one click from their profile page. This is the first time Microsoft has partnered with a social networking site. FULL ARTICLE @ THE NEW ZEALAND HERALD

Bebo Beats MySpace In The U.K.

C NET NEWS.COM -- Aug 14 -- According to comScore, Bebo logged 10.7 million unique visitors in the U.K. for July. This is the first time Bebo beat out MySpace, which had 10.1 million visitors. Facebook rounded out the list with 7.6 million. FULL ARTICLE @ C NET NEWS.COM

Line Between Social And Professional Networking

HITWISE -- Aug 8 -- Recent Hitwise data suggests that business users are accessing both Facebook and LinkedIn networks. This is evident in Australia, where LinkedIn’s downstream website traffic to Facebook increased dramatically in the past quarter. In contract, LinkedIn’s referrals to MySpace and Bebo have either decreased or plateaued. FULL ARTICLE @ DIGITAL MEDIA WIRE

How Will Yahoo! Address Social Networking?

ZD NET -- Aug 1 -- Social sites, which account for 60% of the world's Internet users, are growing much faster than the "traditional portals" like Yahoo!. Bear Stearns analyst Robert Peck projects Facebook could account for 5.5% of all Internet users by 2016, the same amount Yahoo! does today. Peck, therefore, believes Yahoo! has no choice but to buy or partner with a social networking site, like Facebook or Bebo, or risk being marginalized in some of its business. But, who should Yahoo! buy, if any at all? FULL ARTICLE @ ZD NET

REV2.ORG -- July 31 -- Bebo, the third most popular social networking site in terms of users (34 million) and pageviews (100 million per day) has taken the world by storm. It was the most popular search term on Google for 2006 and reportedly has declined offers of $550 million and $1 billion. Despite some basic features that can make the website look a little messy, this 50-employee startup is immensely popular in several countries, including the U.K., Ireland, Australia, and New Zealand. With a recent infusion of $15 million, dreams of reality TV for the web, and an increased focus on creating third-party apps, Bebo may be well positioned for the second dotcom bubble. FULL ARTICLE @ REV2.ORG

RED HERRING -- July 30 -- Bebo debuted online video serial 'KateModern' last week, but already the fictional main characters have extended the drama of their daily lives into the comments, polls, quizzes, and other areas of the Bebo site, interacting with real-life Bebo users and creating a richly-drawn world where real and fake become difficult to decipher. The video serials are turning social networking sites, where the primary purpose is for users to personalize their pages and connect with others, into full-scale entertainment destinations. FULL ARTICLE @ RED HERRING